8 Simple Rules for the Most Complex Game Ever Devised

"Checkers is for tramps" - Paul Morphy

If you're a thrill seeker with a paranoid streak, chess may be the game for you. After all, a 2002 study concluded that "unconventional thinking and paranoia" characterize competitive chess players, two attributes the study also noted as characteristic of thrill-seekers like daredevils and skydivers. So remove the tinfoil hat and put away the bungee cord, because it's time to learn how to play chess.

Playing a decent game of chess is easy, once you have some basic knowledge:

1. Know how the pieces move and the rules

I'm going to assume you know these. But do not stop reading just because you've forgotten how the horsey moves, or you don't know what Castling, Pawn Promotion or En Passant are. Just check out our basic rules of chess.

2. Know the values of the pieces

You can't play chess unless you know how much your pieces are worth. Once you do, you'll know when to exchange pieces and when to retreat. With the exception of the king, whose life is priceless, all the pieces have a point value. Although these values can change slightly depending on specific circumstances, they're usually accurate. The basis for the value of the other pieces is the pawn, valued at one point. Next come the knight and bishop. In some positions the bishop thrives while in others the knight dominates, but overall, they're worth about three points each. The rook is slightly more valuable, at five points. Finally we have the best piece of all, the queen. She's worth 9 points. Her sentimental value to the king is negligible (win or lose, she always comes back to him).

Whenever you're considering trading pieces, know the values. Don't give up a rook for a bishop or knight. But, if you can get a bishop and two pawns for a rook that's fine ( bishop (3) + two pawns (2) = rook (5)). It's even slightly better since quantity of pieces is a good tiebreaker.

Note: The next three points are general chess principles that all players need to remember.

3. Play to control the center

This is a big one. The "center" refers to the four center squares on a chess-board.

Almost everything that happens on the board will involve traveling through one of these four squares. A player with uncontested control of the center has a huge advantage. You can either occupy this region with pawns or attack it with pieces...it doesn't matter as long as you've got something going on in the middle of the board. To illustrate the importance of the center, compare a knight in the middle of the board with one in the corner. The knight in the corner can only move to two squares, while the one in the center can move to eight. 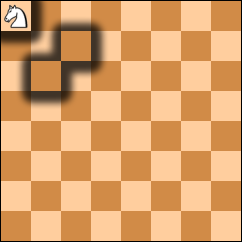 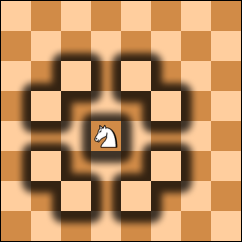 You can't win a game of chess without bringing out your pieces. I often see beginning players develop their most powerful piece, the queen, and shuffle it around, hoping to capture wayward enemy pieces. This is like playing football with only the quarterback...boneheaded. Mobilize your pieces rapidly, especially the bishops and knights. Since they can maneuver through cluttered positions, they function especially well early in the game.

This one should be obvious. The game ends if you're checkmated. But how do you protect the king? Well it's easy. Castle. Since everything goes through the center, a king in the center of the board won't survive long. Tuck him away in the corner. Leave the fighting to his better half.

Every move, check to see if you can capture any opposing pieces. If you can, consider the point values and choose a course of action. Most people play chess like boobs-they'll put their pieces unprotected where you can take them.

Better players won't just throw their pieces away. You'll have to win them. That's where double attacks come in. Since a player is only allowed to move one piece at a time, meeting two simultaneous threats is very difficult. For this reason, making two threats at once, also known as executing a double attack, constitutes the most basic tactical idea. To illustrate the double attack's power, we'll examine the knight fork: 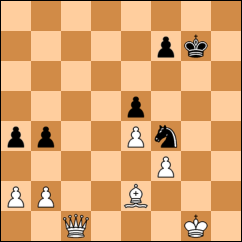 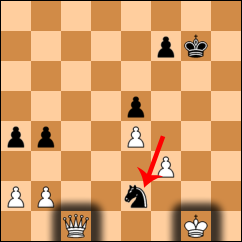 Additionally, double attacks usually revolve around undefended enemy pieces. If you can spot two undefended pieces and attack them at once, you're guaranteed to win one. So when you're considering where to move, watch for undefended pieces.

Before moving, look to see if your opponent has potential checks. Since a check is the most forcing move, it can lead to heaps of trouble. If you spot a possible check, make sure it doesn't create a double attack (like checking your king and attacking an undefended piece at the same time) or lead to other trouble. 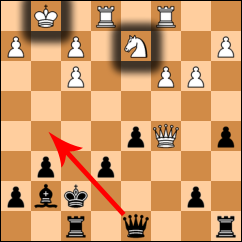 If you follow these guidelines, you'll be able to play a decent game of chess. Congratulations, you've just taken the first step on the road to paranoia, misanthropy, and madness.